Here to review Phantom Thread is Nick Kush From MovieBabble. Make Sure to Follow and like his page in the links down below.

Phantom Thread isn’t exactly what you would call a four-quadrant film, but its production led to some interesting developments that make it a hot ticket for film lovers everywhere.

Following the announcement that Paul Thomas Anderson was going to direct a 1950’s-set film starring Daniel Day-Lewis, pundits immediately chalked up the 2017 Oscars for Best Actor and Best Director to Day-Lewis and Anderson respectively.  That sentiment was admittedly a bit of a joke, but these two gentlemen are generally considered as masters of their craft — and worthy of nominations any time they put out work.

Later on in the development of the film, Daniel Day-Lewis exclaimed that he would quit acting after this performance.  The news sent shock waves through the industry as people became upset that they were losing one of the best talents in the industry.

Actors always announce that they’re retiring but then quickly start again after they get the itch once more.  However, sometimes film breaks its subjects — a reality that Day-Lewis alluded to in the following quote:

“Paul and I laughed a lot before we made the movie.  And then we stopped laughing because we were both overwhelmed by a sense of sadness.  That took us by surprise: We didn’t realize what we had given birth to.  It was hard to live with.  And still is.”

Phantom Thread is certainly not the most commercially accessible film to come out in 2017, but it still deserves your attention. 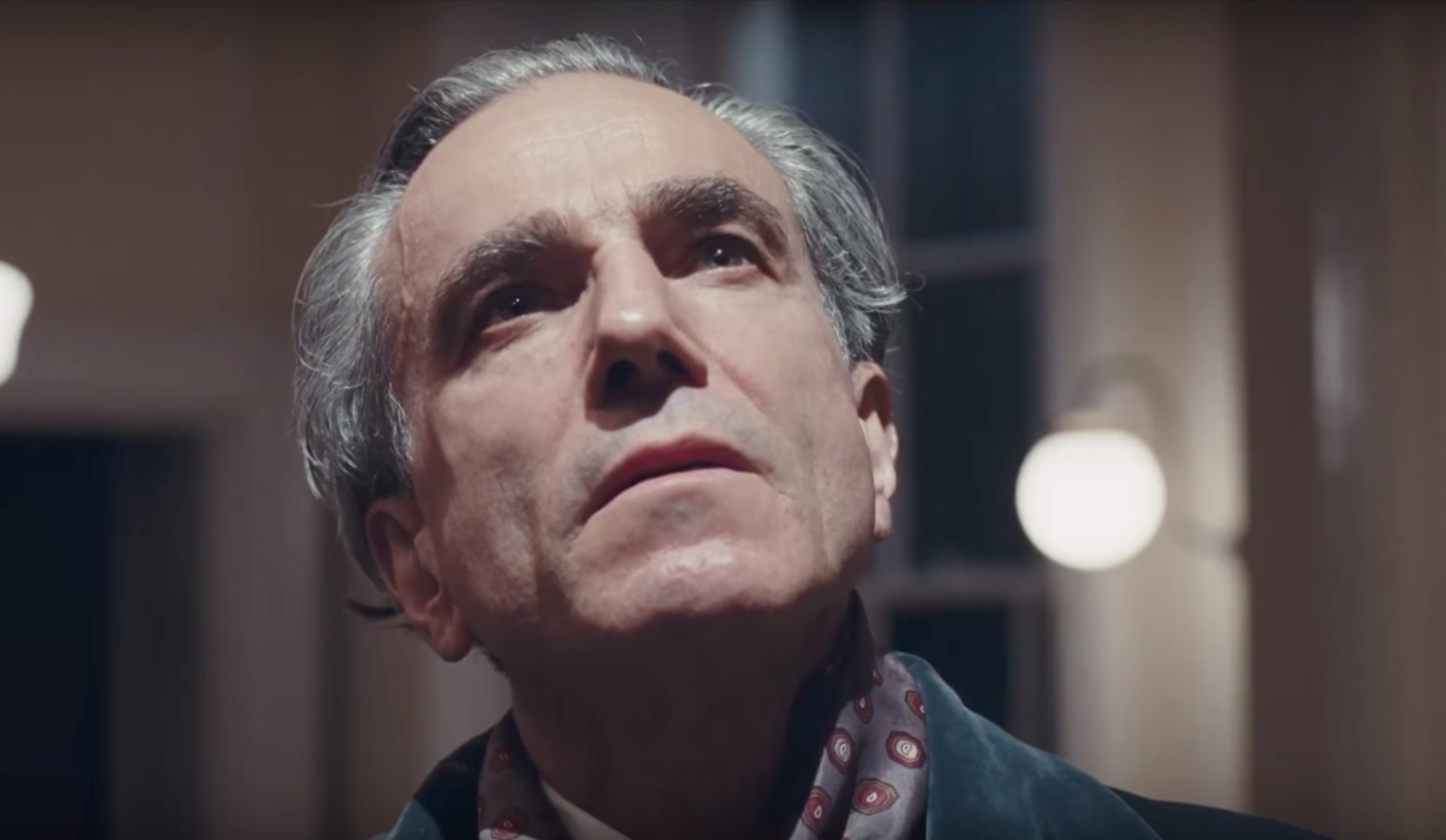 image via the LA Times

Phantom Thread is a very intimate movie.  In fact, other than the three main characters, no one stands out.  Everyone else is either passing through to get measured for one of Woodcock’s beautiful dresses or is merely background noise.  Your attention is completely focused on Daniel Day-Lewis and Vicky Krieps as their odd relationship unfolds, leading to some profound performances.

The next sentence will include the most obvious thing you’ll read all day.  Daniel Day-Lewis is outstanding in the lead role as Reynolds Woodcock.  His onscreen presence is off the charts.  No matter what is happening, your eyes are immediately drawn to him — waiting for his next move.  However, the most impressive feat of his performance is the physicality that he brings.  His voice and movements are a tad dainty and yet he still attempts to express a serious amount of strength.  Daniel Day-Lewis has made a living acting as larger than life personalities.  That trend continues in this case, but it’s a noticeable change from his other work.  Phantom Thread is one of his more subtle performances — thriving in the minutiae of it all.

Amazingly, Vicky Krieps holds her own opposite Day-Lewis.  As a matter of fact, she’s has as much of a presence as Day-Lewis.  Her character is almost the exact opposite, breaking Day-Lewis’ habits in the pursuit of true desire.  As you’ll quickly begin to realize as Phantom Thread progresses, there’s a strong power struggle between these two actors.  It’s unbelievably potent, creating all the drama in the film.

There’s a lot of different tones that went into the making of Phantom Thread.  The film as a whole is obviously quite dramatic, but Paul Thomas Anderson weaves in many other threads (pun intended) of emotion, making Phantom Thread bizarrely human — and unbelievably intoxicating.  The film is shockingly funny, lightening the mood without shifting the tone entirely.  You stay in the somber nature of the film, making the wry humor hit that much harder.  PTA messes with this idea the entire movie, keeping the feel consistent but varying the dialogue and motion.  In these actions, Phantom Thread never feels like a tonal nightmare — it just sucks you in even more.

There’s a distinct style to Phantom Thread that sets it apart from other recent films.  PTA worked without a cinematographer on the film, doing much of the work himself.  Predominantly shooting the film in 35mm, the film has a lovely grainy texture that transports you to 1950’s London.  That grainy texture works hand-and-hand with a filter that seemingly mutes the color.  These elements practically contrast the beauty of the dresses on which Daniel Day-Lewis works, pointing towards a possible nod at the underlying evil that lurks beneath Phantom Thread‘s exterior.

The best films have an undeniably sense of atmosphere that draws in the audience.  PTA easily accomplishes this task, creating something that feels as if there’s a shadow lurking over it at all times.

Phantom Thread is Certainly a Thinker

Phantom Thread isn’t exactly a movie for everyone.  It’s slow-paced, artsy, and highly ponderous.  But, there’s no question that it will leave you deep in thought if you allow it.

The film mostly operates beneath the surface, hinting at a dark interior throughout.  Our two lead actors offer a fascinating exercise in creating a relationship that flourishes for all the wrong reasons.  These two need each other, but not in the way that a typical relationship comes to light.  PTA touches on how our past affects our love life, leading to scars that result from unhealthy relationships.

It becomes rather obvious how Phantom Thread eventually broke Daniel Day-Lewis.  The film is also a great commentary on how diving into one’s work negatively affects those around them — and how oblivious the person is to the suffering they are causing.

In this regard, it’s difficult to discuss Phantom Thread without venturing into spoiler territory.  And honestly, it’s best to dive into Phantom Thread with as little knowledge as possible.  Its mysteries are best left uncovered until your viewing of it.

Paul Thomas Anderson’s Phantom Thread is an intoxicating feature film that looks at the need for human connection unlike most other films.  Daniel Day-Lewis is stellar once again, ending his career on a high note if he so chooses to follow through on his words to quit acting.  His partner in the film, Vicky Krieps, is equally alluring, putting herself on the map as an actress to look out for in the future.

Nothing about Phantom Thread is particularly satisfying in the classical sense of the word, but it will provoke thought unlike many other films, leading to some interesting conversation as you leave the theater.