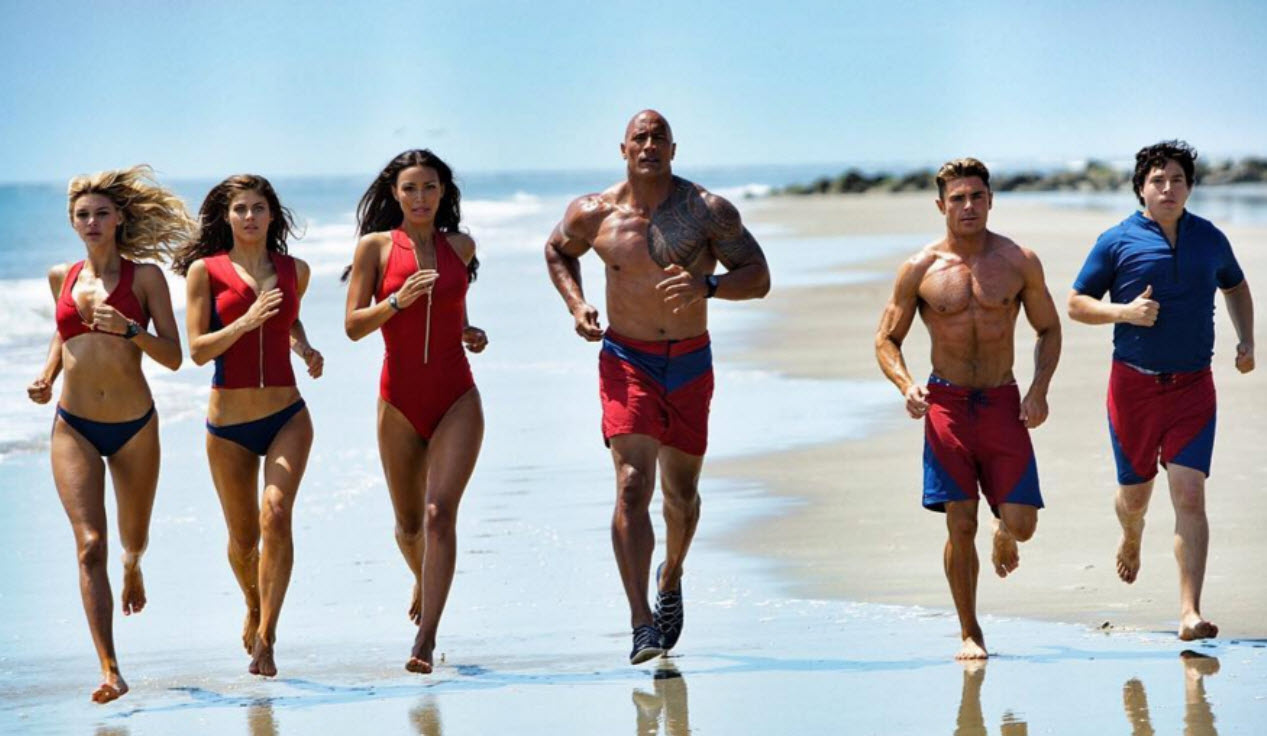 You are probably asking yourself ‘why are they even making a film based on a corny 90s TV Show about women in red swimsuits?’ The answer is money. So let’s talk about the film with two cameos so predictable, the film put them in the opening credits instantly killing any suspense of if they would actually appear in the film in the first place. Baywatch is a film about an ‘elite’ group of lifeguards in Miami who are the superheroes of the Bay, saving the lives of people behind a ridiculous green screen effect. When a new drug washes up on shore described as ‘Bath Salts on Meth’ Mitch (Dwayne Johnson) and a group of new recruits Summer Quinn (Alexandra Daddario) and former Gold Medalist Matt Brody (Efron) to do what lifeguards do and solve crimes and kick ass.

There are quite a few problems with this movie. The biggest one is that the film doesn’t know what it wants to be, a tongue in cheek reboot or a tongue in cheek sequel. The actors in the movie are playing reimaged characters from the original series with the same names while poking fun at the series that they are rebooting. As annoying as cinematic universes have gotten, it would be great to know what angle they were coming from with this film with instead of trying to be a bit of everything and be completely confusing. Secondly, the film prides itself on it’s ‘Hard R’ rating. For you men out there thinking that means you are going to get Alexandra Daddario in full frontal nudity, what you are actually going to get is a 10-minute gag of someone getting their dick stuck in a chair and Zac Efron touching a fake penis…so basically you get the Seth Rogen brand of what a Hard R comedy is supposed to be.

Watching this movie reminded me of a 2002 film called All About the Benjamins featuring Ice Cube and Mike Epps and that’s when it hit me. Baywatch is nothing more than a comedic B-movie that you would have seen in the early 2000s produced in 2017. The action isn’t good, the comedy is lame, and the story is cookie cutter. It’s like some studio head really thought you would see David Hasselhoff and just clap less than 3 weeks after watching his Guardians of the Galaxy 2 cameo. Now that I think of it, All About the Benjamins is better and funnier than this movie, you should probably watch that instead.

There is no way around it, Baywatch is amiss on almost every level. Rock’s likable charm can’t save this film and honestly, he’s much better in action films than trying to save BS comedies like this. Zac Efron has his name attached to another stinker, and I’m not sure any of the women actually won being in his film, except Kelly Rohrbach on the basis you actually know who she is now. Baywatch is a sad cash grab that makes sad cash grabs look bad.