Skip to content
I do hope that in the future, Disney decides to release the original director version of this film so we can compare and contrast who’s vision was better in the long run but as a one-off prequel Rogue One: A Star Wars Story is a solid footnote. 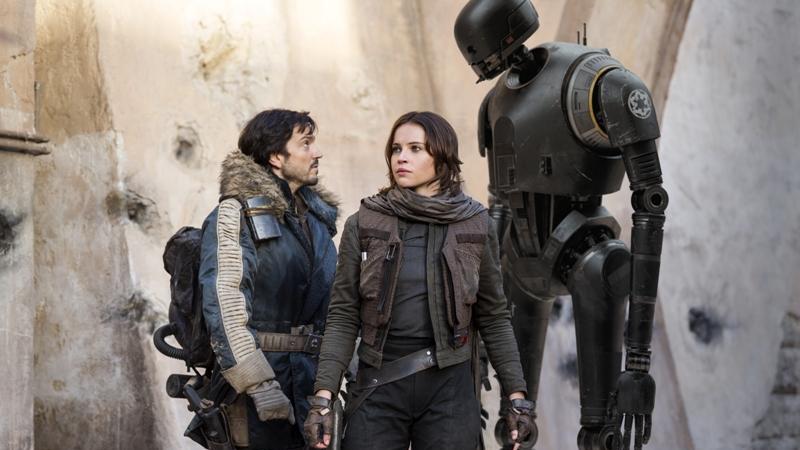 A year ago when Star Wars: The Force Awakens was released, I gave them the chance to draw me into the Star Wars Universe that previous movies were unable to do. After watching that film, while I still have my concerns about what direction Disney will take the franchise, I enjoyed what John Boyega and Daisy Ridley brought to the table and remained consciously optimistic. Fast forward to the summer and news of Rogue One: A Star Wars Story had me more pessimistic about the shape of the Star Wars universe. Over the Spring and Summer, news and rumors of 6-8 weeks of reshoots due to the fact that original version of the movie was ‘too serious’ and ‘didn’t have enough Star Wars in it’. After not doing well with a test audience, there was also word of adding more humor to the film as well. My interest heading into this film was pretty low and I’m starting to sense a disturbance in the force.

Rouge One’s timeline is set right before the events of A New Hope. The story begins with a family fleeing the forces of Imperial Military. A scientist by the name of Galen Erso (Mads Mikkelsen) is wanted to create a new weapon capable of destroying planets. Galen is captured and his wife is killed. His daughter Jyn (Felicity Jones), manages to flee and is saved by a rebel named Saw Gerrera (Forest Whitaker). Fifteen years later, Jyn is all grown up and back under Imperial imprisonment. When members of the Rebel Alliance see an opportunity to use Jyn in an attempt to find and kill her father and stop the creation of the new weapon, Jyn is sent out to find her father and obtain the plans to destroy the Death Star without knowing the team she is with wants to kill him.

The first hour of this film had all but confirmed many of my concerns as not only did I not enjoy it, but I was quite bored for a couple of reasons. Starting with the main character of Jyn, I couldn’t help but feel she was a really weak character overall. Besides looking like Katniss Everdeen, her character was given so little to work with; it was hard for her to ever stand out as anything more than a weak protagonist. Outside of being written as an important character, at no point do you really buy her as the leader, Instead, she feels like someone who just happens to be mixed up in a political chess game.

Another big problem I had is that as the film progressed I started to wonder, is this the same film I watched just a year ago? The Force Awakens starts off with a girl whose story is largely unknown, she is recruited by the resistance to take on the evil empire, the rebel forces debate in a small room on how to destroy the new death star and the Rebel forces fight in space a bunch. Now I admit that I may be oversimplifying things here but considering many people thought The Force Awakens was a remake of A New Hope, I found it odd that this movie was tolling so many lines from that film as well.

Now don’t be fooled, I don’t hate this film as two things really saved it for me: Donnie Yen and the ending. Donnie plays Chirrut Îmwe, a blind fighter who faith relies upon in the force. Chirrut is basically Daredevil with an ability to shoot better but he is funny and a complete bad ass. My only disappointment with him was that they didn’t do more with him in the film. The final act is very good and completely brought me back into the film. A Rouge unit of rebel fighters goes into Scarif in order to steal the Death Star schematics and bring down the Empire’s greatest weapon. The set pieces and the effects in the third act are amazing and I love the idea of filming Laamu Atoll which adds extra beauty to the scenery. The ending isn’t the typical ‘heroes win’ ending and you can see the effects of the reshoots that took place. Now I say this if they had left the ending as is, I wouldn’t have had a problem with it. However, we all know Disney is not the outlet to expect Dark dramas with gritty endings and I get that. However, reshoots do have me worried that the studio heads are relying too much on Nostalgia and callbacks of previous Star Wars films rather than taking a chance on a standalone movie like this actually standing alone.

The journey of Rouge One is a rough one but by film’s end, I was satisfied with the conclusion and overall product. I do hope that in the future, Disney decides to release the original director version of this film so we can compare and contrast who’s vision was better in the long run but as a one-off prequel, Rogue One: A Star Wars Story is a solid footnote in the ever-expanding Star Wars Timeline. I enjoyed the overall cast of characters in this movie much more than I did Force Awakens and this at least gave me faith in the standalone film series. As far as the Main Storyline, I’ll reserve my final judgment for Star Wars: Episode VIII next December.