Skip to content
In a story first reported by Breitbart News, Captain Marvel writer Kelly Sue DeConnic took pride in the fact that the film shows people that there is "nothing inherently masculine” about being a superhero...because being a superhero was somehow viewed as a male thing before this movie?

In a story first reported by Breitbart News, Captain Marvel writer Kelly Sue DeConnic took pride in the fact that her film shows people that there is “nothing inherently masculine” about being a superhero…because being a superhero was somehow viewed as a male thing before this movie?

“None of us have trouble seeing ourselves reflected in white men because we’ve always been told that, that is the default. That’s the default human being and you can cross-identify. And because of that, we are always centering their pain and their comfort. That’s basic humanity. That’s how we’ve been taught to do it.

“When we see authentic culture reflecting back at us, we realize that heroism is not exclusively the domain of masculinity.

There’s nothing inherently masculine about power, or sacrifice, or the power fantasy, or about the sci-fi aesthetic or about the ethical ideals of these superheroes. When you actually see, what you didn’t quite let yourself realize you were missing, it is a shockingly emotional experience.”

DeConnick also told THR that a scene from the movie will be the subject of feminist academia.

“There is a scene towards the end, I think there are going to be Women’s Studies and academic papers written about this scene. I have a lot of opinions about it. I think it is bold as hell and sorely needed. And then there’s something that’s missing from this film that I also think is crazy progressive. But I’m afraid identifying either one of those things would be a spoiler.”

We have seen an unprecedented level of gaslighting for this movie due to the gender politics associated with the film. It all started when the media complained that the film was getting review-bombed which never happened as audience members stated they were not interested in the film. Then Rotten Tomatoes stepped in by removing the ability to say whether you were interested or not interested in any future movies because of the backlash. The site even stated that they would make it harder for audiences to leave a review once the film has come out.

That leads us to today where after media outlets ONCE AGAIN complained that Captain Marvel was getting negative reviews by audience members and the audience score had dropped to 30%, Rotten Tomatoes has now stepped in AGAIN to delete over 50,000+ audience reviews from the site.

This was the outlook from earlier this morning with over 58,000 reviews

And here is the current score Rotten Tomatoes massive deletion. 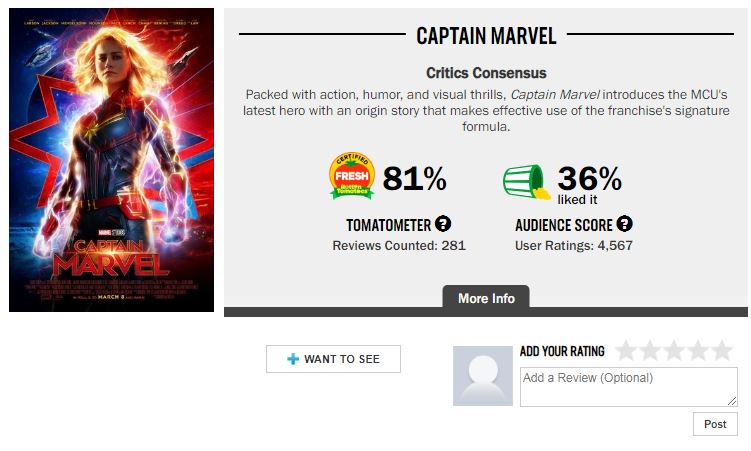 Earlier this week, The Mary Sue falsely claimed that only men were leaving negative reviews of the film which was quickly pointed out as a lie by many online. We have seen outlets such as The Daily Beast triple down on their attack of a white male fanbase, an attack which has caused many to be disinterested in Captain Marvel in the first place. The film made 20 million in its Thursday preview opening and is on track to make at least 100 million this weekend. For reference, last year’s Disney film Solo: A Star Wars Story earned 14 million on Thursday night before ending with a disappointing 84 million for the opening weekend.