Everytime progressives get their hands on a beloved property; THEY decide that it’s time to change it to fit THEIR agenda. Then every time the fans of that property object to their agenda, they demonize those fans as the worst people on earth to deflect and shut down any criticism of their plans. Now Star Wars is the property that progressives have deemed needs to be changed to meet their standards and don’t you dare have a problem with it.

In the last three years, if you have criticized Disney’s Star Wars in any way, shape or form, you have become public enemy #1 in not only the entertainment media but the mainstream media in general. Racist and Sexist you are if you do not approve of Disney’s agenda of diversity and inclusiveness. The general consensus of the mainstream media is the Star Wars fandom has become Toxic.  It doesn’t matter that Disney began this journey with the promise that they would fix the wrongs of the prequels that the fandom equally hated, any dissension from the audience is now deemed unacceptable. You’re probably reading this and thinking to yourself “this is a bit hyperbolic”, however the news that is being reported about the Kelly Marie Tran situation not only sounds fishy, but the timing of this news couldn’t be more suspicious.

Let’s rewind a few days, It was reported earlier this week that actress Kelly Marie Tran, who played Rose Tico in The Last Jedi had deleted her Instagram account due to harassment that she received for her role in the film…at least that is the story the media is giving us because as of the time of this article being posted, there has been no evidence to support that claim. This all started when Tran deleted her Instagram without any announcement or reason for why she did it. Then a post from a fan-run Star Wars Twitter page stated that Kelly Marie Tran has deleted all the posts of her Instagram due to months of harassment she has received for her character Rose in #TheLastJedi.

Kelly Marie Tran has deleted all the posts off her Instagram due to months of harassment she has received for her character Rose in #TheLastJedi pic.twitter.com/ipxdbDH30C

Again, Tran herself has not come out to confirm or deny this report at this time. Even searching that left wing news sources, I couldn’t find any real evidence to support this claim. Sites like Vox, Huffington Post, The Daily Beast, Salon, and Complex spent so much time telling me that Kelly Marie Tran was “The first female person of color to star in a Star Wars movie” that the BEST evidence I could find was a ONE screenshot from Reddit where people left comments about her movie character being terrible on the official Instagram page of Star Wars. 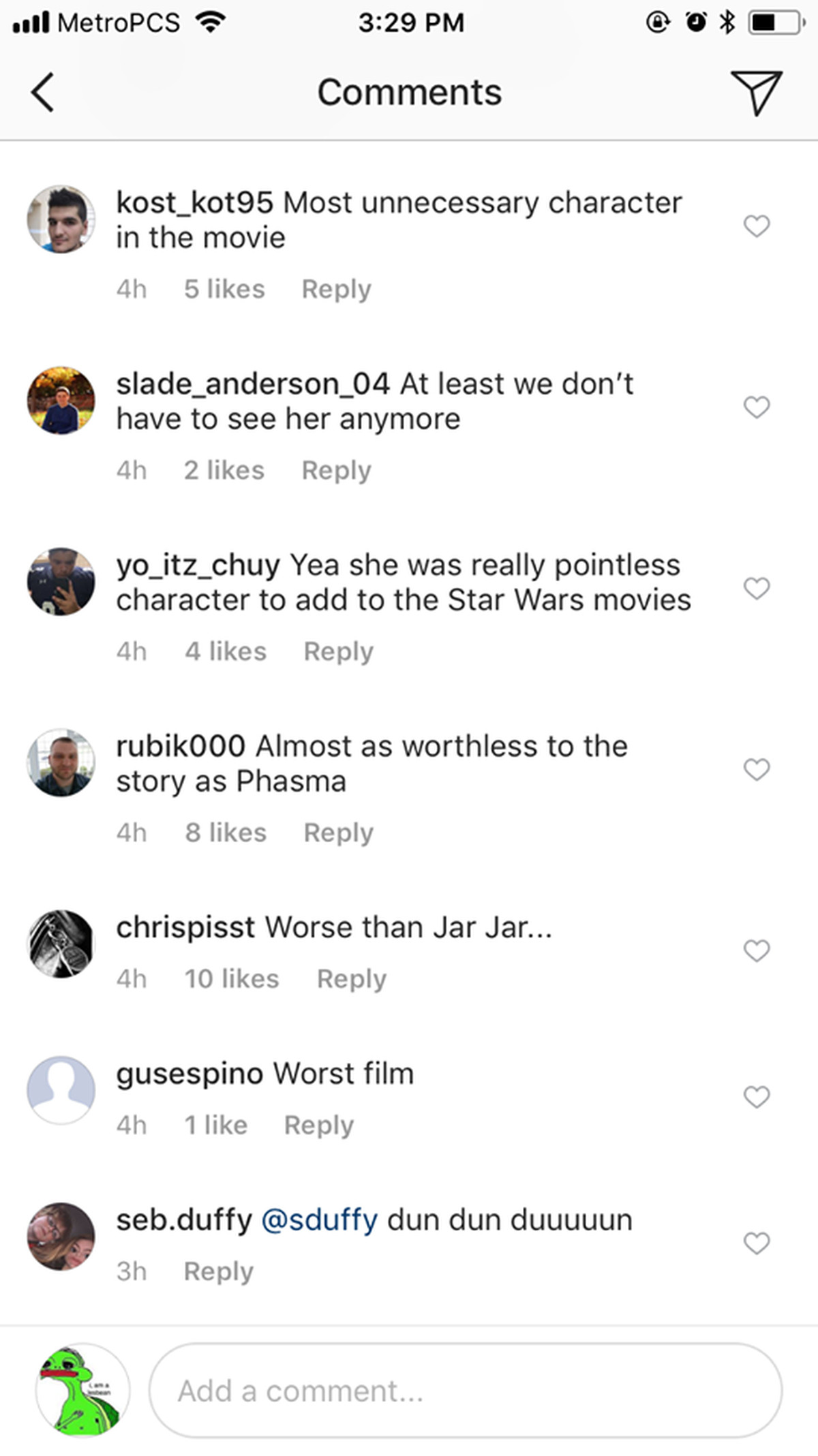 One screenshot from back in January is enough to report that toxic Star Wars fans are to blame for months of harassment despite no confirmation of the facts. ItchyBacca has written an article which includes an EXTENSIVE list of media outlets that jumped all over this story. What you have here is speculation that Tran deleted her account because of harassment but no confirmation or fact.

The timing of this story is really suspicious, why now? The Last Jedi came out in December, all of the Star Wars talk has shifted to Solo: A Star Wars Story (which I’ll get to in a minute). So how did we get back to talking about Rose Tico (Especially since her character got redeemed by the universally hated L3-37). Now I’m not saying Tran wasn’t harassed or that it wasn’t the reason she cleared her account. The problem is nobody knows for sure, yet the media is reporting the story as absolute fact and are attacking the fan base for something they may or may not have even been involved with.

You see what the media won’t tell you is that Tran has repeatedly said that she doesn’t like using social media, including Instagram, adding that she doesn’t like to be in the public eye, scrutinized and judged. So it’s very possible Tran deleted Instagram because she simply didn’t want to be on the platform anymore. Again, this is all speculation but why actually try to get to the bottom of a story when you can simply project your self-righteousness on a group you already despise in the first place.

Even Steven Colbert has gotten into the action by attacking Star Wars fan over this scandal in the latest episode of The Tonight Show. So why now? Why is this all of a sudden the biggest story involving the Star Wars brand? Well if major media outlets are going to speculate with little to no evidence, I’ll do the same with evidence that actually exists.

One thing is true, Star Wars is NOT in a good place right now, but it has nothing to do with the fans, it’s because Star Wars is producing a product that nobody likes. This news comes out conveniently as Solo: A Star Wars Story has officially been listed as a bomb at the box office. Solo has only made 280 million dollar WORLDWIDE thus far…that’s over a billion dollars less than The Last Jedi which came out 6 months ago, and that movie made 700 million dollars less than The Force Awakens.

According to Pamela McClintock at The Hollywood Reporter,

Wall Street analyst Barton Crockett says Solo will lose more than $50 million. Industry financing sources, however, say that figure could come in at $80 million or higher, although no one knows the exact terms of Disney’s deals for home entertainment and television, among other ancillary revenues.

Star Wars toys are collecting dust on shelves, even the DVD sales of The Last Jedi have been embarrassing.

With all of this REAL bad news for Star Wars, the fact that the Kelly Marie Tran story manifested itself out of nowhere this week seems all too convenient for Disney.

The fans are without doubt fed up and tired of Star Wars’s diversity and inclusion being shoved down their throats in subpar movies. What’s the best way to distract people from the fact that the brand is failing and media reports are now calling for Kathleen Kennedy to step down as head of LucasFilm? Accuse the fanbase who is unhappy with your product of being alt-right racist sexist manbabies. As the media wants you to believe that only bigots are complaining about Star Wars, the biggest online critics of the property have been the crew at WorldClassBullshitters (only one white guy, yes this has to be noted for people now). For the last couple of years, they have documented the fall of Star Wars step by step on their channel that has reached over 54,000 subscribers. As they have shown and I have talked about, we have seen this playbook time and time again.

We saw this with Gamergate, we see this with Comicsgate, we saw this with the film Ghostbusters 2016, and we are seeing this with Battlefield 5 and so many others. Every time progressives get their hands on a beloved property; THEY decide that it’s time to change it to fit THEIR agenda. Then every time the fans of that property object to their agenda, they demonize those fans as the worst people on earth to deflect and shut down any criticism of their plans. Now Star Wars is the property that progressives have deemed needs to be changed to meet their standards and don’t you dare have a problem with it. This is becoming an all too tired formula.

In my last editorial on Star Wars I said I can’t foresee any other way to get back in the fans good graces before Star Wars Episode 9, after this stunt from the media, there may not be any fans left in 18 months when that movie hits theaters. If that happens, who will Disney and the media point a finger at next because there may be no one left to point at when it is all said and done.