Skip to content
Thomas Hobbs from LW Lies put it perfectly “The defiant last words of the real-life Tupac were “fuck you”. After two hours and twenty minutes, you’ll want to scream out the same thing.” 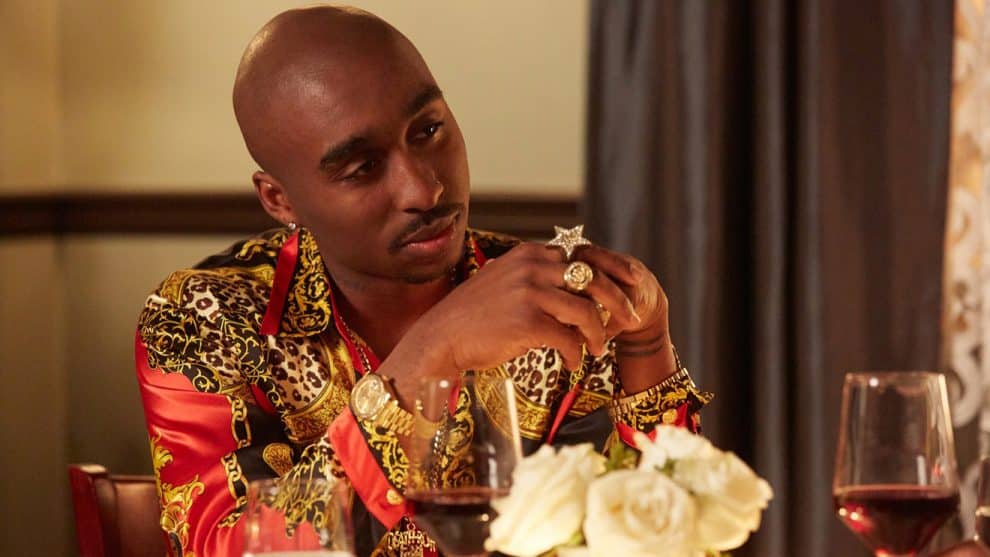 I guess it was only a matter of time before rappers got their own superhero universe as well. After the success of 2015’s Straight Outta Compton, it was announced that a biopic of Tupac Shakur was in the works after years of developmental hell. When Snoop Dogg and Eminem get their own films, this will lead to an Avengers-like super movie accumulating in the Up in Smoke Tour of 2000 (don’t give them any ideas, they may actually do this). If you are a fan of Hip Hop, Tupac Shakur is largely considered one of the greatest rappers of all time. 75 Million albums sold, a successful film career and a lifetime worth of influence on the genre, very few people had the résumé that Shakar did. In 1996, during the height of the East Coast/West Coast rap beef, Tupac was shot and killed in Las Vegas, Nevada at the age of 25. Despite that being the end of Shakar, his story still goes on 21 years later to be told in All Eyes On Me.

This project was honestly in trouble the second John Singleton left the project, I mean hell who knows Tupac better than Singleton? The man who replaces him was Benny Boom, a guy who is known for directing music videos…this should have been the red flag that something was wrong here. All of the things I hated about this were on the filmmaking side. All Eyes On Me decides to approach this project with a checklist and not a story. The first 2/3rds of the movie is a conversation between Shakur played by Demetrius Shipp Jr. and a journalist played by Hill Harper. So Harper will ask “Tell us about this moment” and they will shift to a flashback reacting said moment, this happens again and again…and again. It literally feels like someone read Tupac’s Wikipedia page and decided to reenact every single footnote in his career. This leads to the product feeling like an unbalanced, directionless biopic and not the tribute to the legend of Tupac fans want.

There is no structure or flow to the story. Tupac was a very complex person in his short life due to the content of his music and meaning that went into his songs; this was why many consider him one of the greatest of all time, that doesn’t exactly mean he was a preacher or a saint for that matter. The writers decide to not only be revisionist with their history, but they overstuffed the dialogue with preaching and ‘messaging’ to the audience. Hell, the only thing that was missing was a man in the background with purple robe screaming ‘hallelujah’ after every line. I could spend all day questioning the creative process here, but there was one very glaring decision that needs to be addressed. The decision on the character of Snoop Dogg was puzzling, to say the least, not only did the person playing Snoop look nothing like him whatsoever, but they had the real Snoop Dogg dub over his lines to the point you can clearly tell they were dubbed over lines…I mean this is bush league filmmaking. I expect this from a YouTube video but not a 60 Million Dollar biopic. Side note, Why was Lauren Cohan given top billing for this film? She’s only in two scenes in the beginning and out of two hours and twenty minutes she was only in the film for 30 seconds.

I don’t put any of the blame for this film on the actors. They did what they could and some of them actually do a great job, however, this movie fails behind the camera on just about every level. Just look at Straight Outta Compton, it’s a MUCH MUCH better film and it should have been the blueprint for this. They knew at what point to build a competent origin story, had enough time given to character development, the music was handled more creatively, and you felt like they truly recaptured what was 1990s West Coast Gangster Rap. You simply can’t say that for All Eyez On Me. What was supposed to be a tribute to a legend turns into a high priced Lifetime movie that doesn’t satisfy fans, casuals, or the people that were actually involved in the events that took place. Thomas Hobbs from LW Lies put it perfectly “The defiant last words of the real-life Tupac were “fuck you”. After two hours and twenty minutes, you’ll want to scream out the same thing.”