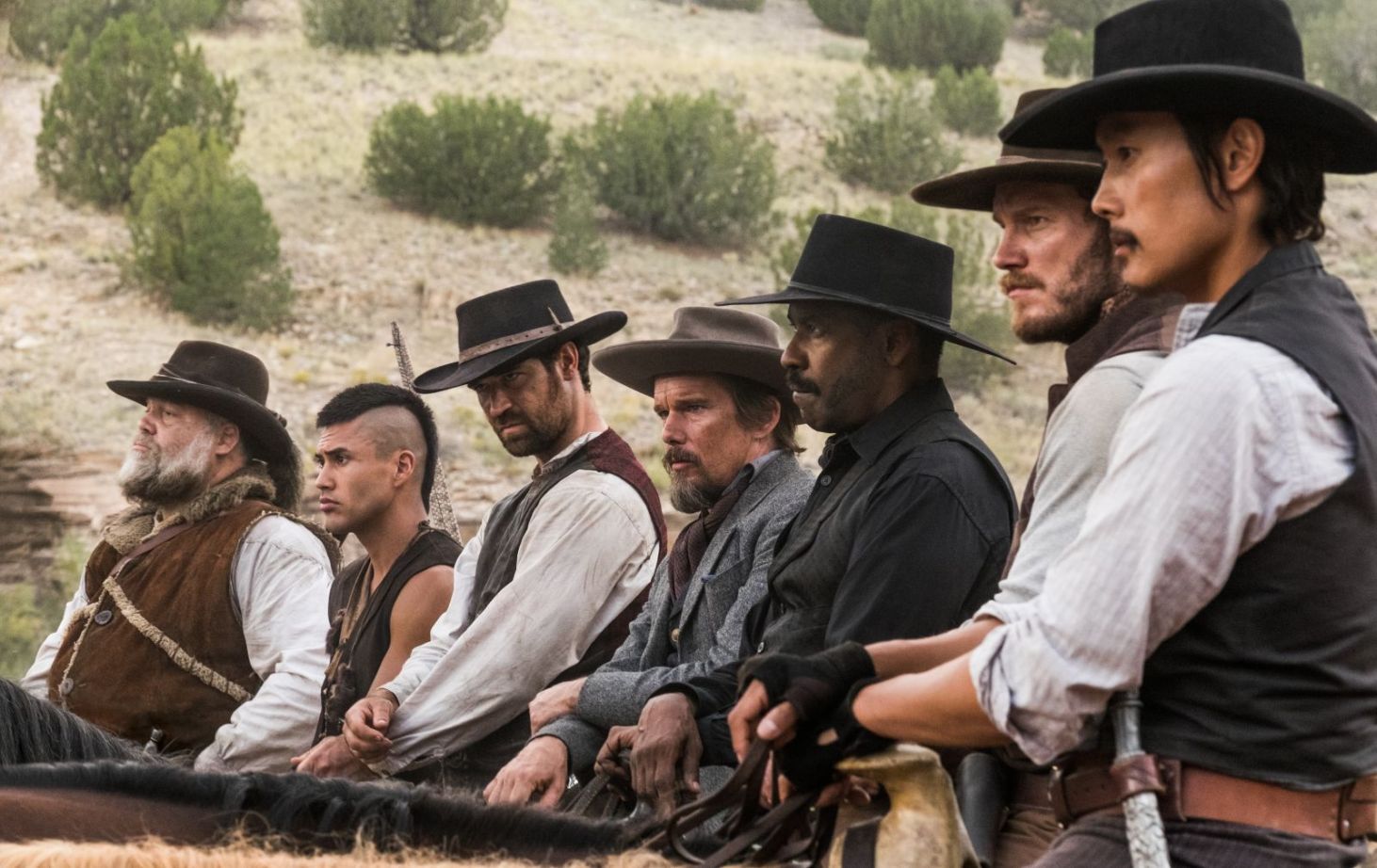 There may be some personal bias here but I’m enjoying the renaissance of western movies. Critical hit films such as The Hateful Eight and The Revenant have made audiences appreciate the old style of  Hollywood films. Starring in this film you have box office heavyweight Denzel Washington along with well-known actors such as Chris Pratt, Ethan Hawke, and Vincent D’Onofrio. I’m going to say this now, I haven’t seen the original film from 1960, so I don’t have much of a reference to go back to. The trailer and the ensemble cast, on the other hand, gave me hope that this can be a good standalone film.

The film is set in the 1870s, a radical tyrant named Bartholomew Bogue (Peter Sarsgaard) has taken over a small mining town called Rose Creek for their gold. After forcing the town to produce more gold at a higher price, he kills many of the locals when they attempt to stand up to him. He even goes as far to burn down their church to make a statement. This forces the wife of slain townsmen, Emma Cullen (Haley Bennett) to seek help and take her town back by force. She manages to find bounty hunter Sam Chisolm (Denzel Washington) who accepts the job in order to get an opportunity at vengeance against Bogue. Sam recruits Josh Faraday (Chris Pratt), Goodnight Robicheux (Ethan Hawke), Billy Rocks (Byung-hun Lee), Jack Horne (Vincent D’Onofrio), Comanchewarrior Red Harvest (Martin Sensmeier) and notorious outlaw Vasquez (Manuel Garcia-Rulfo). Together they prep the town for a literal life or death fight in order to free themselves against Bogue’s force.

Antoine Fuqua, who is best known for directing Training Day, an academy award winning film, reunites with Denzel Washington and Ethan Hawke and a great ensemble cast. The acting is the best part of the movie by far and it would be hard to go any further without mentioning it. The characters are given their own unique skill sets to make them important fixtures in the film. Sam is tough as nails bounty hunter, Josh masters at sleight of hand, Goodnight and Rocks are deadly precise in guns and knives, Horne is a tracker, Harvest is precision with a bow and arrow, and well…Vasquez is Mexican. Despite the number of characters, all of them are given depth with wasting a 1/3 of the film backstory. Each character is unique and plays well off the rest of the cast. The acting makes this film more dynamic and likable even in parts where the script isn’t that strong.

The set pieces are very well done. The majority of the movie is filmed in Louisiana with the scenic shots filmed in New Mexico, but you wouldn’t know that by watching it. Other films try too hard to sell the time period of the movie but you don’t get that with The Magnificent Seven. The action is well choreographed and looks amazing to watch. There are two major action sequences in the film; the first one is about halfway through where our group manages to clear out the element of Bogue’s forces from the town. The second action set piece is in the third act which plays like war film rather than your typical western shootout. The team trains the citizens of the town to defend themselves with guns, they stage traps on the battlefield and even get help from the miners by planning heavy TNT in the way of incoming forces.

I initially had a tough time trying to find negatives with this film. The criticism I can agree with from those who saw the original film. The motivation of why The Magnificent Seven decide to help this town is a bit poorly explained. The only person with a real reason is Sam because Bogue killed his family, others seem to only be in it for the money yet they don’t really explain how much money they would be given to sign up for this suicide mission. The motivation of Red Harvest’s character also is muddy as he just joins without a real need or reason. Ethan Hawke’s character seems like the role was originally written for Jeff Bridges yet somewhere during production, Bridges dropped out and Hawke just happened to be on standby. The villain is not a strong one as he isn’t in the film much. They try to make him too evil to make up for his lack of screen time. The little details in the writing are what could have made this a much better film but it does not stop it from being very good.

The biggest critics of The Magnificent Seven will be fans of the original, that doesn’t mean this film doesn’t have what it takes to stand on its own. The Magnificent Seven is an amazing and fun action western that audiences will enjoy and may even draw them to watch the 1960 film if they haven’t already seen it. The film is charming and crowd-pleasing. There are many great aspects that I don’t even want to spoil for you, that how much I recommend it. Brutal, Funny, Entertaining, and filled with High Octane action, this film is another slam dunk in the genre of westerns.

2 comments on “The Magnificent Seven Review”