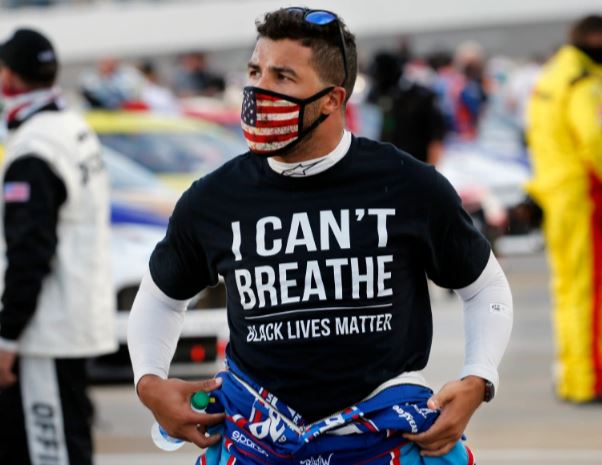 Sports use to be our escape from politics but post-coronavirus there are no sports and the ones that are playing are fighting each other to prove who is the most loyal to Black Lives Matter.

A month ago, a police officer in Minnesota killed a man.

Since that day, progressives have used his death as justification to tear this country apart emotionally and literally. “America has to change, the system has to be destroyed.” Since that day, rioting, looting, murder, assault, the destruction of private property, the creation of autonomous zones, and the cancellations of anyone who dare challenges the mob has become the new normal.

Sports use to be our escape from politics but post-coronavirus there are no sports and the ones that are playing are fighting each other to prove who is the most loyal to Black Lives Matter.

Bubba Wallace is NASCAR’s only black driver. So when the world began to turn into a Mad Max movie, Bubba saw an opportunity to strike. Bubba Wallace became Black Lives Matter’s sole spokesman in the world of motorsports, and in the process, he single-handedly destroyed NASCAR in a matter of two weeks.

Just two weeks into national unrest, Bubba Wallace saw an opportunity to boost his own profile being the only black voice the sport had, and Bubba wasted no time using the platform presented to him by the death of a man in Minnesota to attack NASCAR for allowing the confederate flag.

Wallace ran to CNN wearing an “I Can’t Breathe, Black Lives Matter” shirt to say that the Confederate flag makes him feel “uncomfortable.”

There’s going to be a lot of angry people that carry those flags proudly but it’s time for a change. We have to change that, and I encourage NASCAR we will have those conversations to remove those flags.”

The angry people that Bubba was talking about was NASCAR’s mostly southern, mostly conservative, and mostly white fanbase. Those who are more likely to support and display the flag at events…so NASCAR banned them.

“The presence of the confederate flag at NASCAR events runs contrary to our commitment to providing a welcoming and inclusive environment for all fans, our competitors and our industry, bringing people together around a love for racing and the community that it creates are what makes our fans and sport special. The display of the confederate flag will be prohibited from all NASCAR events and properties.” – NASCAR said.

One man with one complaint single-handedly got an organization with a mostly southern fanbase to ban the rebel flag at all events. That’s a lot of power. With one power move, Bubba Wallace became the most powerful man in the sport despite the fact he has never won a single race. When the sport hands you absolute power…you use it.

Days after his comments, Wallace sported a #BlackLivesMatter paint scheme on the No. 43 car he drives for Richard Petty Motorsports. But that was only the beginning, right after NASCAR banned the rebel flag, they began to allow protests of the American national anthem, which Wallace promptly utilized to protest while wearing his Black Lives Matter t-shirt while kneeling.

Bubba Wallace has become the top driver in the sport, not for anything he did while on the track, because of social justice. In a matter of days, Wallace had gotten arguably the most conservative sport in the country to kneel at the altar of social justice in spite of its own fanbase…but it didn’t stop there.

A full week had passed and no one was really talking about Bubba Wallace anymore, that was until Wallace’s team claimed that someone had hung a noose in the garage of the driver. Once again, Wallace had become the biggest sports story in the country.

NASCAR responded with the following:

“Late this afternoon, NASCAR was made aware that a noose was found in the garage stall of the 43 team. We are angry and outraged, and cannot state strongly enough how seriously we take this heinous act. We have launched an immediate investigation and will do everything we can to identify the person(s) responsible and eliminate them from the sport. As we have stated unequivocally, there is no place for racism in NASCAR, and this act only strengthens our resolve to make the sport open and welcoming to all.”

Wallace released his own statement regarding the issue on Twitter.

We should all stand with @BubbaWallace today against the cowards who secretly put the noose in his garage stall. Watch your back cowards. Bubba has a bigger army than you do. #HateWontWin #WeStandWithBubba

This is TRUMPISM: "Noose Found in Garage of Bubba Wallace, NASCAR's Only Black Driver" This is what happens when Trump defends white supremacy and the monuments to it https://t.co/fjxBEL2ELi via @mediaite

Filed to ESPN: An open letter to the cliché racist coward who left the noose in Bubba Wallace's garage at Talladega. Congratulations. You scared no one, least of all Wallace. https://t.co/YjW9ur8mS8 #NASCAR

Perspective: Racist hate for Bubba Wallace was inevitable. Now NASCAR must stand with him. https://t.co/16LAo9yzZ0

The cowardly actions of a few bullies — a noose in the garage or waving Confederate flags outside Talladega — failed to have the desired effect of fear.

Instead, they galvanized Bubba Wallace and NASCAR's push to change the sport. (via @ESPNMcGee) https://t.co/IzY1BLI8bW

The vicious hangman’s noose that threatened NASCAR’s Bubba Wallace was a reflection of racism long since present. What’s new is one thing: Donald J. Trump and his disgusting invitation to act out racist fantasies.

Progressives COULD NOT WAIT to attack NASCAR’s fanbase for being a bunch of bigots, countless articles and news segments were created to tell NASCAR that they need to change, they need to do better…and the sport took the side of progressives.

When the news of the “noose” made headlines, NASCAR had a large group of drivers push Wallace’s No. 43 car to the front of the pack on Monday in a show of solidarity.

Social Justice had consumed the sport.

Wallace then went on The View to condemn anyone who didn’t believe his story that some racist with NASCAR credentials hung a noose in his garage and nobody saw him.

“It’s simple-minded people like that, the ones that are afraid of change, they use everything in their power to defend what they stand up for… instead of trying to listen and understand what’s going on.” – Wallace Said.

The problem is, you simply won’t shut up and listen…stop talking and listen…to the truth.

Then the truth was revealed.

On Tuesday afternoon, the FBI concluded their investigation to prove that not only was a report of a noose found in Wallace’s garage false but it turned out that someone in Wallace’s crew mistook a door pull rope for the noose in question. Not only that, but the rope has also been there since last October.

U.S. Attorney Jay Town and FBI Special Agent in Charge Johnnie Sharp Jr. said its investigation determined ‘although the noose is now known to have been in garage number 4 in 2019, nobody could have known Mr. Wallace would be assigned to garage number 4 last week.’

A crew member for Richard Petty Motorsports discovered the noose Sunday at the Alabama race track. NASCAR was alerted and contacted the FBI, which sent 15 agents to the track to investigate. They determined no federal crime was committed.

And just like that, the hate crime became a hoax.

In order to believe Wallace’s story, you have to believe that his team, a group of highly trained mechanics who have been working in car garages for years, somehow mistaken a basic pull rope with a noose???

But wait just a minute…

Wallace comes out hours later to double down on the claim that he believes it was a noose despite the fact the FBI proved it had been there for at least eight months prior. Wallace went on CNN with Don Lemon to stand his ground on his claim.

“I’ve been racing all of my life, we’ve raced out of hundreds of garages that never had garage pulls like that. … It’s a straight up noose.” – Wallace Said.

"I've been racing all of my life, we've raced out of hundreds of garages that never had garage pulls like that. … It's a straight up noose."

Not only did Wallace double down on his story but several members of the sports media then switched the blame on NASCAR itself for claiming the rope wasn’t a noose and some went as far to blame NASCAR for assigning Wallace to the garage knowing it was then in the first place.

They just don’t believe it was directed at Bubba Wallace.

I know facts nor context is your strong suit, but do try to keep up. https://t.co/dxsqLeSp7A pic.twitter.com/xSfeY0wRVq

Re-read the statements. The FBI called it a "noose" — three times. The NASCAR statement called it a "garage door pull rope fashioned like a noose" & the NASCAR president said they're still investigating why it was fashioned that way. https://t.co/ZONmX9Q05P

Since it was there since 2019, it’s not a hate crime. How common are nooses in Alabama, that one can be left there for a year and goes unnoticed? 🤔 https://t.co/oYiZolAXNY

In just two weeks, NASCAR torpedoed its entire fanbase to please ONE man, one driver who was barely a Top 20 talent and the organization threw their fans under the bus for one guy.