There were 109 LGBTQ regular characters counted in original scripted series on the streaming services Amazon, Hulu, and Netflix as well as 44 recurring characters, for a total of 153 LGBTQ characters.

The world’s largest streaming service has become noticeably ‘gay friendly’ when it comes to the content of their movies and television shows. So much so that even their official Twitter account had to defend themselves when called out about it on Twitter.

On Tuesday, the official Twitter account for Netflix caused quite a stir online when they responded to a Twitter user who posted a meme about the abundance of gay characters in the original content. 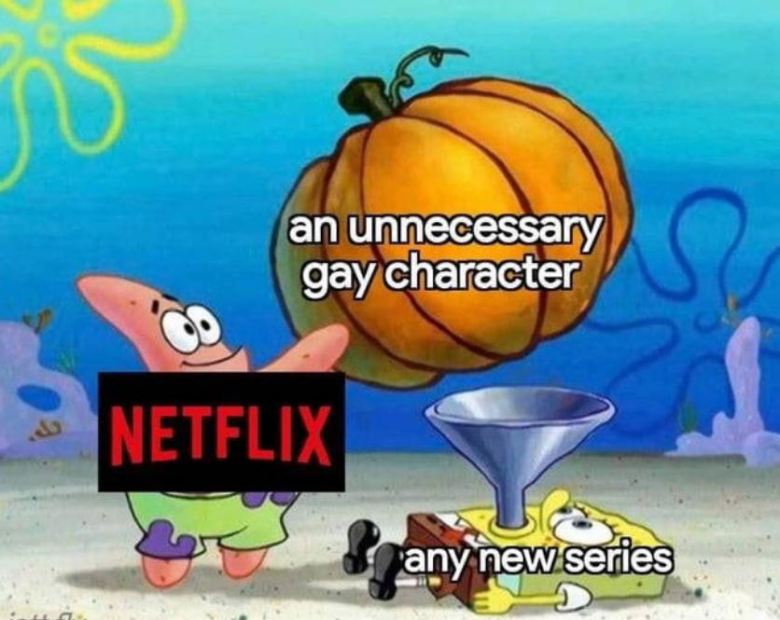 The SpongeBob meme posted by the user shows Netflix shoving gay characters in their series prompted the media giant to respond by saying:

sorry you have yet to realize that every gay person is very necessary https://t.co/xTOEcLWryc

The post led to an array of responses attacking their position of shoehorning gay characters for the sake of “representation”.

No Netflix – NO. He's making a statement that you are adding gay characters to shows JUST because they are gay and to score points and for no other real reason. There is no "storyline" reason for it… And Netflix isn't the only ones doing it…

Netflix did get an array of support, however. The support came from other corporate media outlets who celebrated Netflix’s commitment to LGBT characters.

Woooow. Wack opinions like this are the reason gay characters are overly necessary. Keep it up, @netflix. 🏳️‍🌈❤️ pic.twitter.com/gzhUyVXlrk

Hollywood has made a strong effort to increase the number of gay characters in film and television shows in the last decade. Last year, the industry has a record number of LGBTQ series regular characters on broadcast television with 10.2% all of TV characters.

There were 109 LGBTQ regular characters counted in original scripted series on the streaming services Amazon, Hulu, and Netflix as well as 44 recurring characters, for a total of 153 LGBTQ characters.