Skip to content
Currently, disgruntled MCU fans are pushing the hashtag #SaveSpidey as an effort to get the character back into the MCU. Now while some takes are a bit unhinged, there are some good memes being provided. 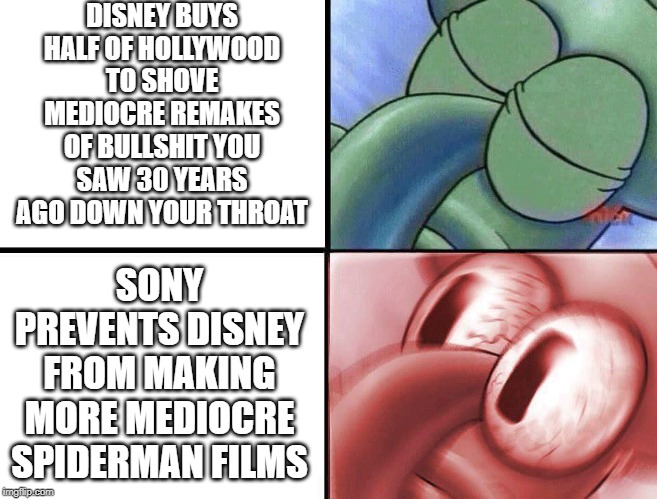 You would think that Disney buying 50% of the market share just to obtain the X-Men franchise (which won’t see another film for the next 6 years, maybe) would be enough to the MCU fanboys but apparently, Disney must control everything they watch. On Tuesday, it was reported that Sony Pictures backed away from their partnership with Marvel Studios to produce Spiderman movies and insert the character into the MCU…and fanboys MELTED DOWN.

Reports were rampant about Disney wanting 50% of the profits from the Spiderman films which is higher than the 5% they currently obtain. Social media came together to condemn Sony for refusing to give even MORE money to Disney with some calling on Sony to tell the property to Disney. The heat online got so bad that Sony executives had to put out a statement defending themselves. Sony claims that they backed out of the deal due to Marvel super-producer Kevin Feige not being able to commit to the Spiderman series anymore.

From The Hollywood Reporter:

“Much of today’s news about Spider-Man has mischaracterized recent discussions about Kevin Feige’s involvement in the franchise,” says a Sony spokesperson. “We are disappointed, but respect Disney’s decision not to have him continue as a lead producer of our next live-action Spider-Man film.”

The studio then says Feige, who shepherds the robust Marvel Cinematic Universe for Disney-owned Marvel, may just have too much on his plate, given that Disney recently acquired additional Marvel characters via its acquisition of 21st Century Fox.

“We hope this might change in the future, but understand that the many new responsibilities that Disney has given him – including all their newly added Marvel properties – do not allow time for him to work on IP they do not own,” says the statement. “Kevin is terrific and we are grateful for his help and guidance and appreciate the path he has helped put us on, which we will continue.”

The statement comes as THR and others reported Tuesday that Sony and Disney have parted ways as co-producers on the revived Spider-Man movie franchise. Reports suggest that studio chiefs Tom Rothman and Sony and Alan Horn at Disney could not agree on a financial arrangement to continue to collaborate.

Currently, disgruntled MCU fans are pushing the hashtag #SaveSpidey as an effort to get the character back into the MCU. Now while some takes are a bit unhinged, there are some good memes being provided.

Tony Stark: *dies in Avengers Endgame to bring back #SpiderMan *

Sony: *removes SpiderMan from the MCU*

What I learnes from SONY/DISNEY drama, #MCU fanboys are fucking childish. pic.twitter.com/ZinJoLc21g

Live footage of Sony taking Spider-Man back from the MCU pic.twitter.com/74MZsjjl1M

Meanwhile, this is Sony looking at all the crying and bitching about the Spider-Man news 😂#SaveSpidey #SpiderMan #sonyiscancelled pic.twitter.com/UTHoBNuIV5

Feige when he read the #SpiderMan damage control piece from Sony: pic.twitter.com/NVxGdQVqn3