As was reported back in February of this year, Rotten Tomatoes have been in the planning stages of ensuring that negative reviews of movies are harder to post and see on the site. This comes off the heels of members of the media decrying negative reviews of Disney’s Captain Marvel after audiences rejected the intersectional feminist push of the film’s marketing.

Rotten Tomatoes now features an Audience Score made up of ratings from users we’ve confirmed bought tickets to the movie – we’re calling them “Verified Ratings.” We’re also tagging written reviews from users we can confirm purchased tickets to a movie as “Verified” reviews.

Users can verify ticket purchases through Fandango; AMC Theaters, Regal Cinemas, and Cinemark have signed up to participate in our verification program, and we plan to introduce other ticket providers as well. Users who want to verify their ratings and reviews simply choose where they bought their ticket when leaving their rating and/or review. If we can match their Rotten Tomatoes account to the account used to buy their ticket, their rating and/or review will be verified.

You’ll see written user reviews marked “Verified” when you click into the Audience reviews section for a particular movie. You can choose to view only verified reviews or read all included user reviews – verified and not – together.

As we’ve mentioned, we’re working on bringing other ticket providers into our verification system, as well as finding ways we can verify ratings and reviews for movies that are not theatrically released, for TV series, and for streaming titles. And there will be further enhancements to come.

As of this writing, all audience scores on the website have been reset or purged. Films such as See You Yesterday which had an audience score of under 40% (vs. it’s critic score of 93%) have now been cleared and has seen it’s over 300 reviews purged. 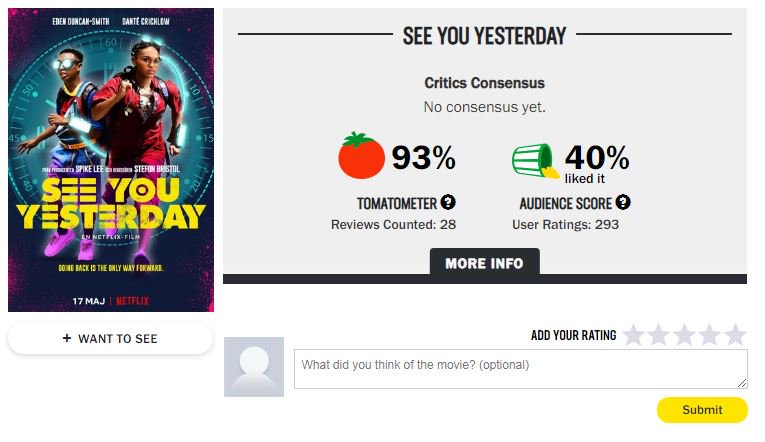 The war between Rotten Tomatoes critics vs audiences has been dragging on for quite a while. Many view this move as an attempt to curb general audience members who have an opinion of a film that differs from mainstream critics, especially when discussing films with a political narrative. Rotten Tomatoes has not confirmed how their ‘verification system’ will work for VOD or Streaming releases but promise even more changes to the site are on the way.