If you can’t beat em…silence em.

The ‘Interested/Not Interested’ feature on Rotten Tomatoes has been a part of the site for many, many years. But after the media complained about fans voicing their displeasure with the upcoming Captain Marvel by using the feature to say they WEREN’T interested in the film, that option no longer exists. Late Monday night, Rotten Tomatoes officially changed their ENTIRE RATING SYSTEM to remove their ‘Not interested’ ratings and in return have hidden the over 30,000 audience not interested scores for Captain Marvel. The change occurred after last week, many members of the mainstream and pop culture media were furious that fans were voicing their displeasure with the upcoming film mainly due to the star Brie Larson and the multiple comments she has made about men in the last 6-8 months. The backlash was so bad that even members of the upcoming film Shazam film had to condemn their fanbase for claiming that they would rather watch that movie than Captain Marvel.

The audience interest score was 72% at the time of the media’s attacks and as of today, that number was as low as 27% before the site pulled the plug on the reviews. Rotten Tomatoes had already begun to remove ‘not interested’ ratings from public view to give the illusion that the film was more positively viewed but once the score fell below 30%, a number that ranks among the all-time lows for the site, they pulled the plug and not only changed the layout for Captain Marvel but for every other upcoming movie on the site. Now you are only allowed to press a button displaying your interest in the film as the interest score has been officially removed. Here is what the layout looks like at the moment. 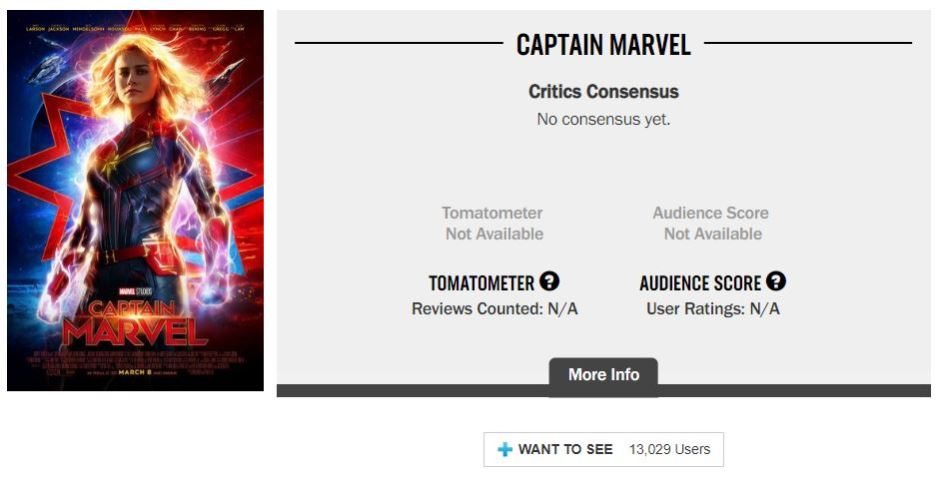 Rotten Tomatoes has officially given a reason for the change:

Starting this week, Rotten Tomatoes will launch the first of several phases of updates that will refresh and modernize our Audience Rating System. We’re doing it to more accurately and authentically represent the voice of fans, while protecting our data and public forums from bad actors.

We are disabling the comment function prior to a movie’s release date. Unfortunately, we have seen an uptick in non-constructive input, sometimes bordering on trolling, which we believe is a disservice to our general readership. We have decided that turning off this feature for now is the best course of action. Don’t worry though, fans will still get to have their say: Once a movie is released, audiences can leave a user rating and comments as they always have.