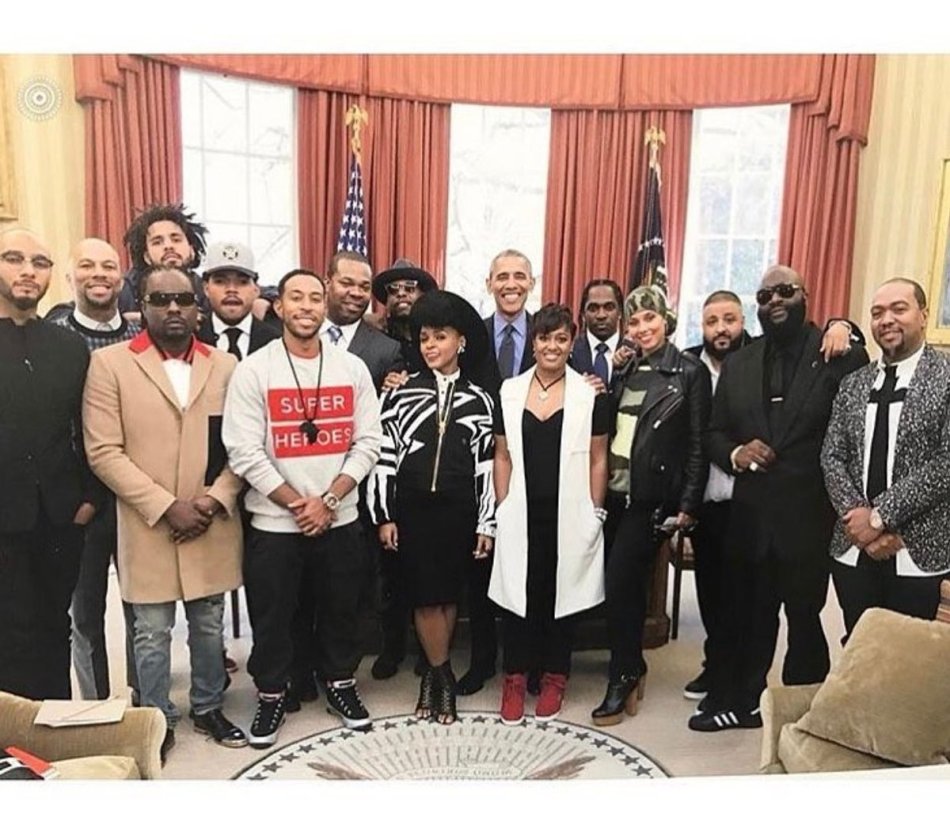 Barack Obama was considered in many aspects ‘The celebrity president’. Democrats enjoy the luxury of having famous celebrities endorse their platform and their party with no backlash. Katy Perry, Demi Lovato, Lady Gaga, Jay-z, LeBron James, or Taylor Swift. Celebrities are given the platform to endorse Progressives and the media NEVER questions whether these people are qualified to talk about these issues or question their mental well-being in doing so.

The rules and standards change however if a celebrity endorses a conservative or even worse Donald Trump *gasp*. On Thursday, President Trump met with Kanye West, Kid Rock, and Legend Jim Brown to discuss a large range of topic and the media could not handle it.

Starting off with Kanye West who showed up to the white house to have lunch with the President and give his support, West discussed a few issues he had while sitting across from Trump more especially the political left.

“A liberal will try to control a black person through the concept of racism because they know that we are very proud emotional people,” West said. “You think racism can control me? That don’t stop me, that’s an invisible wall.”

You can see the full exchange in the video down below

THIS DID NOT SIT WELL WITH THE MEDIA

The media proceeded to shred West online and on television, not only for supporting Trump but for being a Black Man who supports conservatives. Black Americans are intensely attacked if they do not to toe the line of the Democrat Party and are deemed ‘sellouts’ by Democrats if they leave the party to join Republicans.

Sad. @SECupp said it best about the Kanye-Trump meeting: "That was really sad. I think you had there a man who's clearly not okay, and a president who's willing to who's willing to exploit that." pic.twitter.com/JuadQFMxkH

Looks like @MSNBC wants to get in on the action framing Kanye West as a crazy person by calling his meeting with President Trump an "assault on our White House" "bonkers" "crazy".

This is what fear looks like. They know Kanye will swing some voters. pic.twitter.com/ywkASYVbPp

As I keep saying, shamelessness is a superpower and Ye has even greater reserves of it than Trump.

Kanye's rambling is pretty much a 1:1 recitation of YouTube conservatism and righty vloggers, which are extremely paid for and the next frontier of the Breitbart/InfoWars right.

This is only a small sample size of the hatred and anger that was directed at Kanye by members of the mainstream media, more tweets and videos can be found here. But he wasn’t the only who the left directed their hostility towards. Civil Rights Legend Jim Brown was also in attendance in which he spoke out against players protesting during the American National Anthem.

Jim Brown speaks to media outside White House: "I don't think that we should take knees in protest instead of be standing up for our flag." pic.twitter.com/sZDTsfyinp

Jim Brown, a man who fought institutionalized racism and won was not spared from left wing attacks.

Kanye West is a disgrace for meeting with him.
A total, unmitigated disgrace.
So is Jim Brown.
Honestly, jokes aside, that was infuriating, and sad.

And shame on you too, Jim Brown.

Did anyone else get the memo that Kanye and Jim Brown represent black America? (but if this mug ends up getting us 40 acres…I might reconsider my position).

Kid Rock also appeared at the White House on for the president’s signing of a major music regulation bill. Rock who has also been a vocal supporter of the president praised him for the bill and the progress in the country.

“There’s a whole lot of people in this country that do give you a lot of credit for everything you’ve been doing for this country,” Kid Rock said. He continued to say he was pleased that songwriters, producers, and engineers were getting more of a cut in the profits from music, calling them the unsung heroes of the industry.

.@KidRock remarks at the White House: "A big part of this bill that I'm a huge fan of is for the unsung songwriters out there." pic.twitter.com/El5DfHohjY

Kid Rock walking into the White House today. This is a man who said, “People are like, 'Beyoncé's hot. Got a nice f*cking ass.' I'm like 'Cool, I like skinny white chicks with big tits.' Doesn't really f*cking do much for me." pic.twitter.com/rgwBih1qrx

Kid Rock is at the White House for the second time. I can't even come up with a joke for how ridiculous this is. I'm going back to bed.

One thing is certain, today was NOT a good day for the left